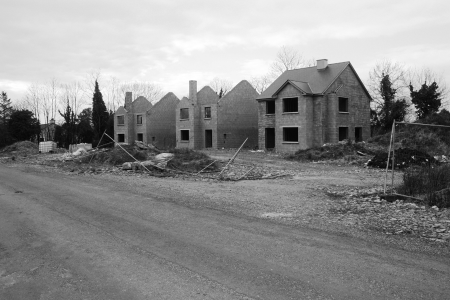 Through stories of alienation, murder and marriage breakdown, Broken Harbour and Gone Girl explore the devastating impacts of economic austerity and unemployment – but what can we learn from these popular works of crime fiction?  What do these tales of ‘murdering middle-class’ residents reveal about the psychological effects of neoliberalism?

In the opening pages of Broken Harbour, Detective Mick “Scorcher” Kennedy is offered a ‘high-stake’ case – a family of four, brutally attacked in ‘one of those new places’ in Ireland.  Ocean View, a fictional development in a new Dublin suburb, is a recently constructed town designed for middle-class families and smart investors keen to climb the property ladder.  Contrary to the developers’ plans, Ocean View lacks basic infrastructure and amenities.  As one resident explains, the nearest pub is  ‘twelve miles away’, and she has to go ‘five miles to buy milk’. To make matters worse, the estate has many unfinished homes, making it a classic ‘ghost estate’ – a term used regularly in Ireland to describe new-build developments where over 50% of the properties are either vacant or under-construction’[i]

As author Tana French explains, Broken Harbour was inspired by the generation of thirtysomethings who rushed to buy property in Ireland during the pre-2008 boom years: ‘People doing this were people trying to do the right thing, the thing that everyone was telling you to’.[ii] Although this sensibility is most pronounced in the behaviour of Patrick and Jenny Spain – one of the first couples to move to Ocean View – it extends, in various ways, to other characters in the book.  Even Scorcher himself, who lives in a bachelor pad in Dublin, says he is a ‘big believer in development’:

‘I’d rather see an apartment block any day, all charged up with people who go out to work every morning and keep this country buzzing and then come home to the nice little places they’ve earned, than a field doing bugger-all good to anyone except a couple of cows.  People are like places are like sharks: if they stop moving, they die’.

Despite the optimism of Ireland’s so-called Celtic Tiger years, the fictional environs of Ocean View suffer a fate worse than death or demolition.  Mirroring the story of thousands of properties in present-day Ireland, the development lives a painful half-life; an aborted existence haunted by ‘the ghosts of things that never got the chance to happen’.

Ghosts of the present: unfinished estates in post-Celtic Tiger Ireland

The background to the economic crisis in Ireland has been well documented, however its psychological impact is less easy to put into words.  If, to quote Bernardo Soares, ‘some truths cannot be told except as fiction’, it has become increasingly important to explore what works of art and literature reveal about the problems of neoliberalisation.  At a time when Ireland is dealing with the devastating impacts of economic austerity and record levels of unemployment, French’s cautionary tale of a family who thought they had done the ‘right’ thing – worked hard; bought a property, started a family – probes the relationship between economic change and the Irish psyche.

As Ireland struggles to meet the terms of an €85 billion bail-out package from the EU and IMF, the families and individuals who bought into the ‘national speculative mania’ of the boom years are often denigrated by the media.[iii]  On top of this, despite high levels of negative equity across the country and a property surplus of almost 300,000, the search for a neoliberal solution to a neoliberal problem continues in Ireland, and many other countries worldwide.[iv]  Rather than radically rethinking the workings of the housing market, or the system at large, the aim is to resuscitate a struggling market and continue to promote high homeownership levels as a hallmark of a functioning, liberal society.  In this context, the inadequacy of the term ‘ghost estate’ comes into stark relief: rather than being relics of the recent past, these ‘pathological geographies’ paint a vivid picture of the present.[v]

Doing the “right thing”: the politics of aspiration

Before moving to Ocean View, Patrick and Jenny Spain are perceived as the quintessential, Celtic Tiger couple – an attractive and reasonably affluent husband-and-wife who signed ‘a hundred and ten per cent mortgage’ deal in 2006.  Escaping city life for what seemed like the suburban dream, the Spains wind up stranded, distressed and unemployed in a development of ‘skeleton houses’ and broken promises.

Displaying strong parallels with Gillian Flynn’s bestseller Gone Girl, Broken Harbour paints an unsettling picture of today’s broken middle-class. One of the strongest commonalities between the Spains’ trajectory and that of Nick and Amy Dunne in Gone Girl is the impact of unemployment on family life.  Both newly-wed couples, the Spains and the Dunnes are portrayed as smart, hard-working people – Nick and Amy were successful writers in New York, while Patrick Spain worked in financial services recruitment before ‘they let him go’.  Even Jenny, who quit work before moving to Ocean View, ‘got really serious about being a stay-at-home mum’, keeping the place ‘spotless’ even as her family life unravelled.   In turn, the fall of both couples into a violent, domestic dystopia is accentuated by the belief that they had done things right.

In contrast, however, to French’s narrative, Flynn’s newly-weds do not move house out of choice.  Coterminous to Nick and Amy losing their jobs in New York City, Nick’s Mum contracts cancer while his Dad suffers the effects of Alzheimer’s disease.  Spurring a move to Nick’s hometown of Missouri, the couple end up in ‘a miniature ghost town of bank-owned, recession-busted, price-reduced mansions, a neighbourhood that closed before it ever opened’.  And of course the couple’s decision to leave ‘the frantic, thrilling futureland of Manhattan’ was seen as the right thing to do at the time…  Little did they know that this change in environment would elicit a murderous descent ‘into the darkest recesses of the human psyche’.[vi] 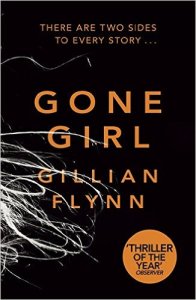 mortgage crisis.  Facilitated by a laissez-faire attitude to lending, “mortgage meltdown” reached a peak in 2006 with an unprecedented rise in foreclosures – by the end of 2007, nearly two million Americans had lost their homes.

Although Nick and Amy’s property is rented, their experience of living in a ‘failed development’ with many foreclosed properties has deep-seated, psychological impacts.  As Nick explains:

‘Driving into our development occasionally makes me shiver, the sheer number of gaping dark houses – homes that have never known inhabitants, or homes that have known owners and seen them ejected, the house standing triumphantly voided, humanless’.

Unsettled by their new environment, Nick and Amy ultimately blame each other for their plight.  Thus, through twists strikingly resemblant of Broken Harbour, an internecine husband-and-wife battle ensues.

At ‘The Future State of Ireland’ conference last November, Professor Luke Gibbons described a new trend in Irish film and crime fiction, that of the ‘murdering middle classes’.  Citing books such as Broken Harbour and Alan Glynn’s Winterland, as well as films such as What Richard Did and Kisses, he explained how contemporary portrayals of a ‘dystopian Ireland’ offer new readings of the ‘fallout of the Celtic Tiger’ period.

Forced to live in strange recessionscapes, the couples in Gone Girl and Broken Harbour blame themselves and each other.  Resulting in madness and murder, the psychological trauma experienced by the Spains and the Dunnes is accentuated by the fact that they internalise their worries.  While both couples are portrayed as busy, sociable people during the ‘boom years’, all four protagonists retreat, in different ways, from their friends and the few neighbours that they have.  Notwithstanding a close relationship between Nick Dunne and his twin sister Go – who has ‘moved back home after her own New York layoff’ – there is a sense that the main characters in these books are too ashamed to share their feelings.

While Broken Harbour and Gone Girl capture the mood of a generation; while they act, in some ways, as barometers of the post-2008 psyche, neither French nor Flynn can bring themselves to write a happy ending.  In the end, both books are tragedies because the authors make it so, but that does not mean we cannot learn from them.

As the past few years have taught us, societies shaped by markets and debt are unsustainable.  In this context, it is interesting that the Spains and the Dunnes rarely acknowledge the elephant in the room.  Like many cultural representations of the crisis, Broken Harbour and Gone Girl portray the irrational actions of people as the cause and effect of the crash.  In both books, unfinished ‘ghost towns’ – produced by an irrational boom-and-bust economy – often symbolise the dysfunctional behaviours of the developers that produced them; the bankers that funded them; the politicians that encouraged them and the shortsighted people that moved into them.  In other words, the idea that these developments are the product of human follies belies the complexity of the capitalist mode of production.

Surviving on a diet of crisis and contradiction, capitalism reproduces itself through a process of constant modification and self-destruction.  In Mark Fisher’s words, it ‘is fundamentally and irreducibly bi-polar, periodically lurching between hyped-up mania (the irrational exuberance of ‘bubble thinking’) and depressive come-down’.[vii]  While we are all complicit in the movements of capitalism, it is important to remember – particularly in times of crisis – that capitalism is itself traumatised.  In this way, the distress experienced by citizens in present-day Ireland, America or elsewhere can be understood as an expression of a much bigger pathology – a disease that no one individual can solve.

Perhaps then, by refusing to provide happy endings, both Flynn and French understand that change will not emerge through blame or introversion.  Although the authors often gloss over the economic details of the crash, the books intimate that we should rescue from situations of crisis a sense of solidarity and community.  Reflecting the need for more compassion, more empathy and communication, Gone Girl and Broken Harbour show that to tackle the effects of neoliberalism and austerity, we must look much further than our front doorsteps…

This article was first published on the Future State blog in March 2013, as part of the research project Ghost Towns. View the original article here

[iii] Report of the Commission of Investigation into the Banking Sector in Ireland, Misjudging Risk: Causes of the Systemic Banking Crisis in Ireland, March 2011, Department of Finance, retrieved 1 April 2011http://www.finance.gov.ie/documents/publications/reports/2011/nybergreport. pdf, piii

[iv] In total, the 2011 Census revealed that there were 289,451 vacant properties (14.5% of total stock) in April that year.  Of these 59,395 were classed as holiday homes.[v] For discussion of the term ‘pathological geographies’, see my paper ‘Pathological Geographies: The Materiality of the Global Financial Crisis’, http://www.mara-stream.org/research/1091/

iThere are no comments

Begin typing your search above and press return to search. Press Esc to cancel.